Last day in SF, first day in Ann Arbor, and the travel in between (and a bit about the pig-smelling dog)


Our last day in California was spent a little bit all over the place. Kristian and Luca got to hang out with their best friends (Jon and Emilia, respectively) while I took the teenagers downtown. We had a simple plan: walk, eat, ride cablecars, shop!
First stop was walking from the Ferry building towards Ghiradelli Square passing all the piers and the sea lions along the way. Yep, sea lions are still there. Yep, they still stink, and yep, they are still doing their best to start fights and push each other into the water. Gotta love sea lions! 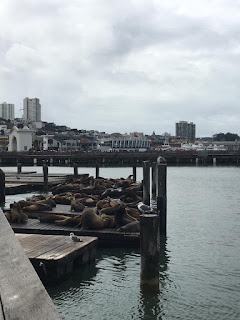 Then it was time for lunch. Only a fool would eat before entering the Ghiradelli icecream place. This time Ulrik actually managed to finish his giant icecream/fudge/cookie/whipped cream combo. 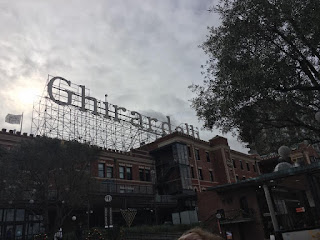 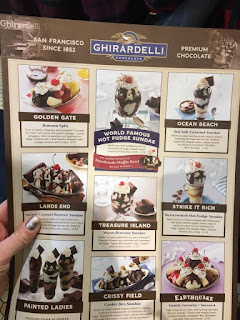 And feeling full on the verge of nausea it was awesome to just walk a few minutes to get to the cablecars. They are considered super touristy and they are not a cheap way of getting around, but I just love riding them. The view from the hilltops and the humming from the underground cables are  why I love them so much. Our ride had an apprentice conductor aboard who was learning the tricks to ride them. As a consequence we had quite a few “this is how you do an emergency stop” practices and extra fierce ringing and yelling at random cars and tourists. Quite entertaining!
The cablecars end at Powell and Market – right where all the shops are. How convenient! Teresa and I quickly got rid of Ulrik by dumping him at the giant Games Workshop store – and then we almost ran back to Uniqlo. Teresa was the one having the most luck – here she is on the rainbow stairs carrying her loot: 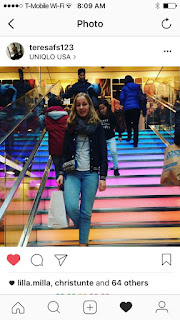 When we reached Anthropologie however, I was the only one still having money left……. Muhahahaha. And I spent the crazy sum of 25$ on a sweatshirt on sale!

Kristian and Luca came to join us, and “someone” got “slightly” upset that he did not have ice-cream for lunch……..

Our last evening was spent in Pacific East Mall (I always thought it was East Pacific Mall, but I appreciate the efforts from the 14 year old member of the Phan family to do everything in her might to convince me that I was WRONG!) at a Japanese restaurant. Marit and Thai had never tried it before, but it was crazy delicious. To the point where I think this might actually have been some of the best vegetarian sushi I have ever had. Thai had a whole grilled squid to the amusement of the Frikke family kids.

And maybe some of us actually cried………..

But the moods were instantly improved upon spotting a Benefit cosmetics vending machine in the terminal: 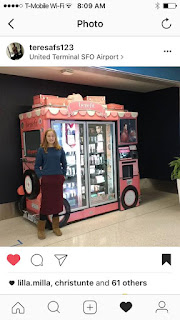 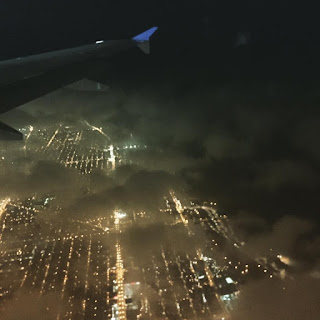 This time we spent our night in Chicago close to the airport. As most Chicago hotels breakfast was not included at the Sheraton. It felt a bit odd to eat McDonalds takeaway breakfast there, but 14$ for a bowl of cereal delivered to the room, made us go for McD hot cakes and eggmcmuffins instead.

We boarded the train to Union station that for some reason was overflowing with Amish families. I chatted with a super tired mom having 4 kids aged 4 and under. The baby was peacefully sleeping on a jacket on the floor, completely at peace despite all the hustle and bustle around her. It turns out that she had been entertaining on the train all night. Yikes.

4½ painstakingly long Amtrak hours later we were finally back in Ann Arbor, 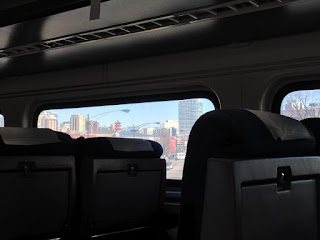 where Kristian and the kids instantly jumped in the car to go get Bailey. He had been hanging out on a farm west of Waterloo with 3 other dogs and a pig. Needless to say he got a bath the following day. He is SO happy to be home, that he hardly slept the first day, but yesterday afternoon he finally caved in. Ladies and gentleman: if any of you wonder exactly  how much snoring  a single dog is capable of producing, just click here: