Today is the day after the day, and I have time to write a little more detailed.

Teresa's confirmation was such a good day, but also a day where it really could be felt that we are far away from family and our friends back in Denmark - besides my brother and sister, that came all the way here for Teresa :-)

Last year none of the confirmands were wearing white dresses, so Teresa had found a really nice second hand one in neon pink'ish and blue. And also hair, nails, nails and shoes were carefully selected to be just right. But then we saw the weather forecast and some of Saturday was spent panicking in Plato's Closet to find a dress that might be slightly warmer to wear - but no luck.

Teresa's friend Lauren came and spent the night. Definitely a full house for us, but fortunately she did not mind spending the night on the couch with Bailey...... Actually we ended up being all done and ready way too early Sunday morning, even after having curled the hair! That left time for preparing melon balls: 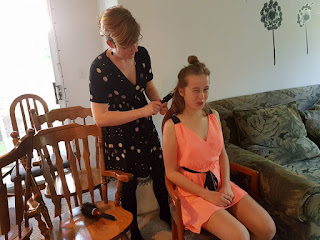 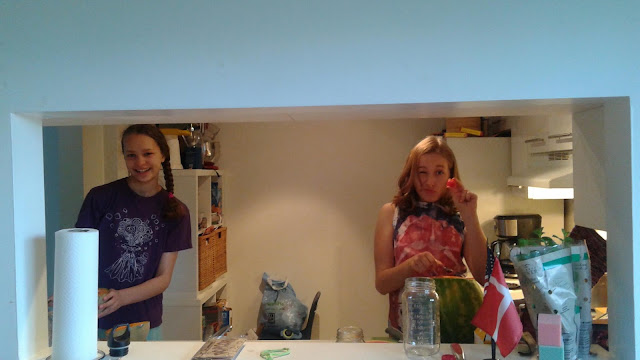 We even made it to our church way too early (driving in snow!!!!!! by the way) where we could then panic a little bit that all the other girls were wearing white dresses. Argh. 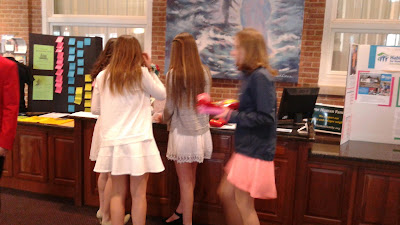 But honestly it did not matter too much in the end. Here we are after the confirmation. I just love that the parents and family got to be with their confirmand. 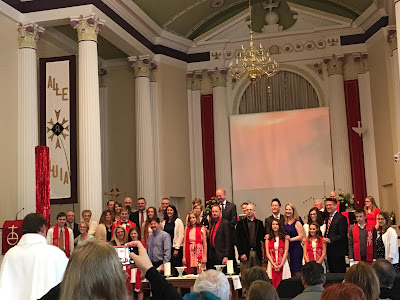 After church we had some of our closest friends invited over for lunch. There was the song (a very proud Danish tradition). 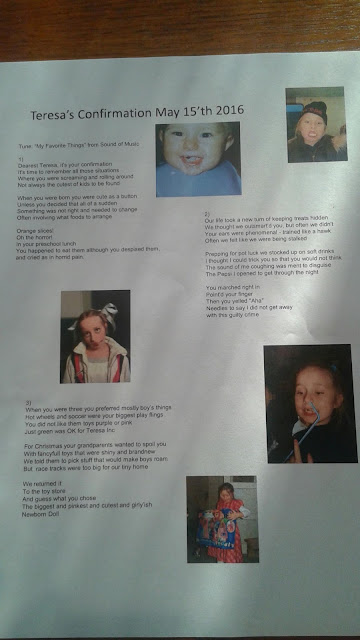 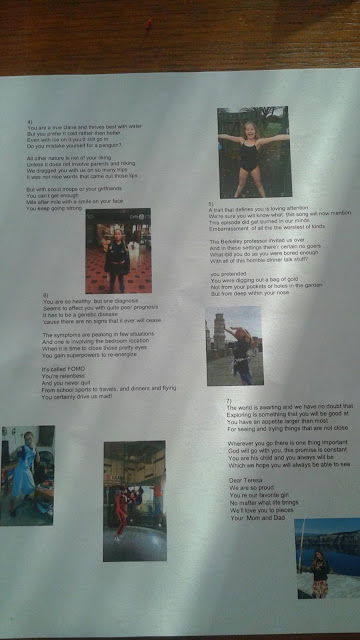 And my sister had dragged a giant bag all the way over the Atlantic with embarrassing pictures and embarrassing little gifts to go with the pictures. All her nephews and nieces truly fear her! LOL 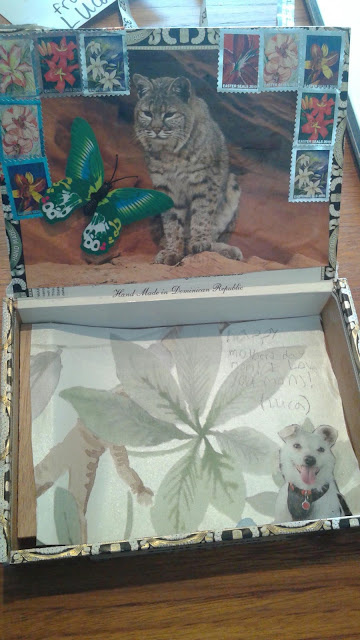 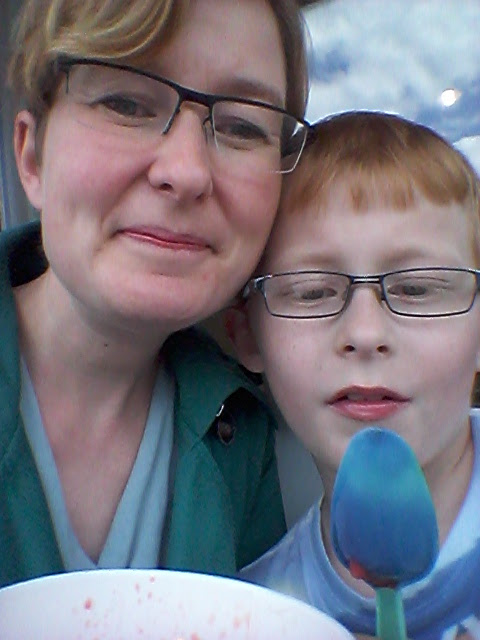 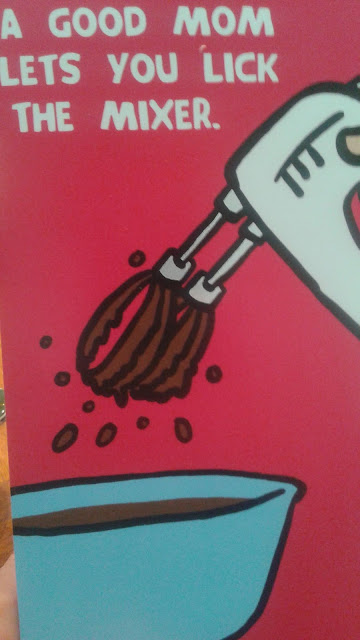 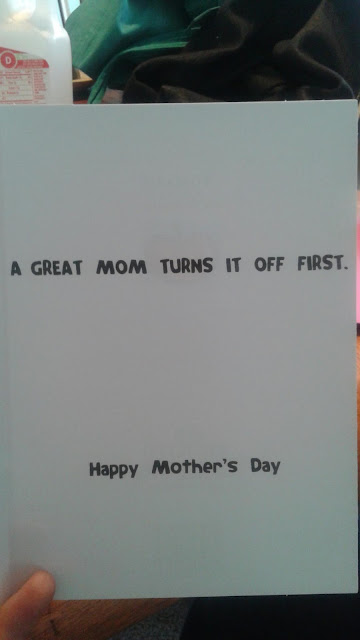 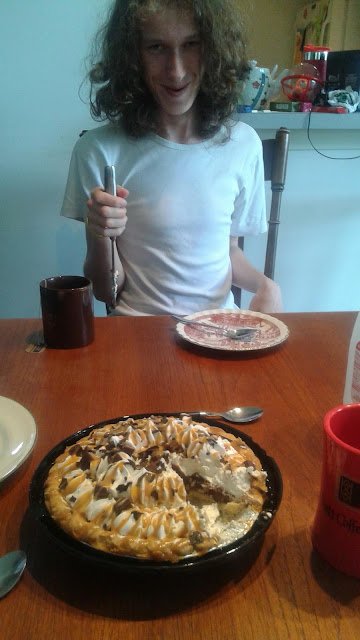 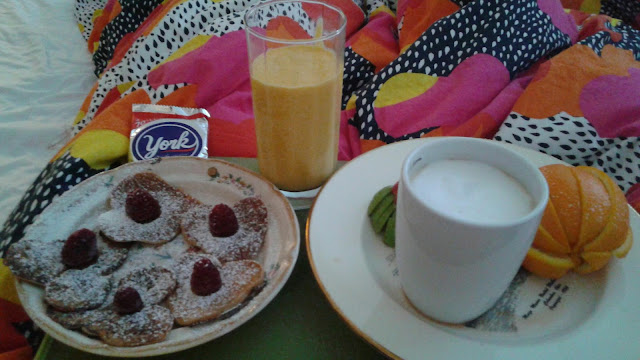 Concerts on porches and couches on the patio


We are counting the down the days right now till next Sunday where we will have Teresa’s confirmation. We are far from as ready as I would have liked to be but she has a dress, freshly cut hair, the song is in the writing (2 verses so far), Brazilian brigadeiroes are in the making by Fabee (our favorite Brazilian!), and Friday we had the carpet cleaned in our apartment. Sigh. Including getting the living room emptied out completely. Most things fit in the bedrooms but our dinosaur of a couch had to go somewhere else, so Kristian and Ulrik ended up placing it on the patio. It was brilliant! When we got home tired Friday afternoon to a wet carpet (and a super confused dog) we decided to heat up the barbecue and just chill on the couch outside (and no, i do not know why Kristian looks very unhappy on this picture, maybe because there was no space for him on the couch as the kids and I filled it out........): 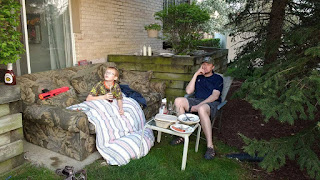 We encountered a baby squirrel that was even more confused than our confused dog. But based on the intelligence level of the poor squirrel’s mom it was not surprising. She left her pup, as a black cat sneaked in, and chose to climb into the nearest tree hissing and yelling but leaving the pup unattended. In the end I put on some gloves and carried the poor thing to the tree where it’s mom was having a fit. We have not seen them since, and I wonder if they made it. 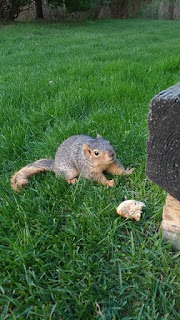 Saturday has been pretty uneventful as we moved furniture back and hunted down Ann Arbor for something cheap to resemble a water resistant patio couch. Et voila: some free pallets picked up at the lumber store, an old futon mattress from that had been left by the trash container, a couple of outdoor tablecloths from Aldi, a few abandoned couch pillows, and a whole lot of plastic and duck tape to seal everything: 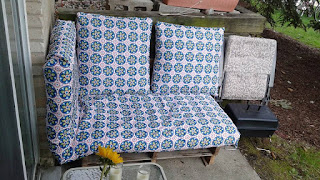 It works super well and only cost us 35$ (including getting a saw to deal with the pallets).

Teresa had been pretty bored being dragged around town to lumber stores and Home Depot, so she really wanted to test some of her new make up on me. After 30 minutes of several layers of primer, concealer, 3D illuminating powder, failed attempts at fake eyelashes etc etc I was very concerned to go look in the mirror. But actually it was not that bad: 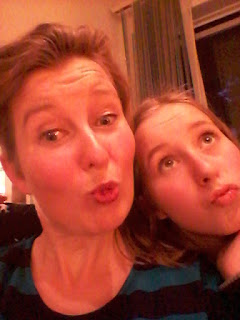 And finally a little on “concerts on the porch”. Last Sunday was the annual Waterhill Music Fest which takes place in that area of Ann Arbor where only few people can afford to live but where it is so nice that you would want to stay anyways. Kristian has been asked to join Purple Gold Mountain (or maybe it is Gold Purple Mountain…..) for a porch concert. The band consists primarily of a couple of guys from the church band with a profound love for folk music and banjos. Frankly – it was the best band I heard that day: 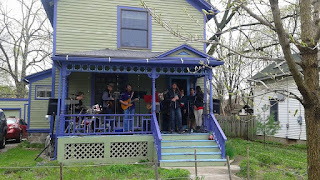