From hate to love (sort of)

It is no secret that I used to hate geese. I once lived close to a big green area in the outskirts of Copenhagen and every morning I had to pass by massive flocks of super aggressive Canadian geese. It got to the point that when I pushed the kids around in their pram I would intentionally pretend to run them over, just to see them waddle-escape while hissing. Not to mention how much fun it is to step in a goosepoop as they usually look like something coming out of a doberman and not a bird!

Where they winters are long, and grey, and cold - much longer, and grey'er and colder than we have ever tried before. And in February when you have given up every hope that spring will ever happen and that you are destined to live in a Narnia world with eternal winter....... then the sky fills with honks. They come in large noisy flocks and the battle for nesting places begin. There is a pair by the school bus that just loves to walk out on the road an honk at the cars. Others sit on the rooftops and honk their hearts out - especially if they have not found a mate. And the battle begins at work, where we have a courtyard that is to geese what downtown Detroit is to hipsters! They all want in - and they are ready to fight for it.

Geese are still not exactly my favorite animal, but now they represent to me that spring is near. Hail Geese! 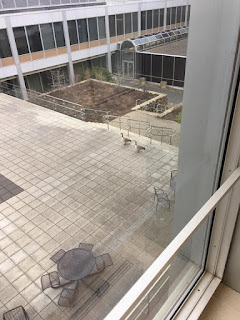