What a year! In so many good ways. I have often used this last blog post of the year (or the first and last blogpost of the year recently....) to remind myself that good things did actually happen, but 2022 has been different with quite a few significant events of the best kind. Here we go:

One of the things I promised myself after the pandemic, was to be way better at going out for events like concerts and theater, and with a Broadway show in January we got a head-start. Kristian and I went to see Moulin Rouge in a frigid NYC and it was absolutely awesome! 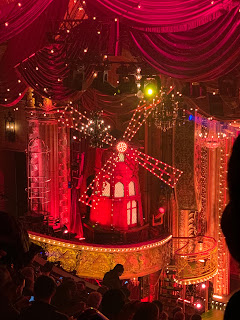 I also got to eat my way through Chinatown in Philly again. Teresa was heading back to Oregon and had some time to kill between trains. Quite conveniently Philly's Chinatown is right next to the big train station and what better way to end a Christmas break than loads of dim sum? 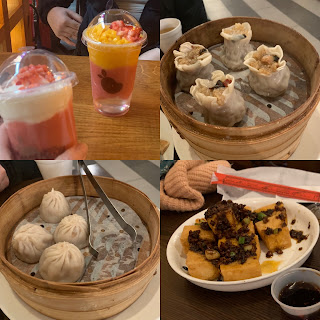 Speaking of Oregon..... Kristian went out to visit Teresa and the slopes on Mount Bachelor in February. 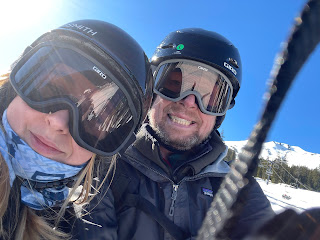 Luca and I joined him on the west coast a few days later, albeit a bit further south. We were back in our old hood in the Bay Area. Every time I am there it always surprises me that we actually used to live there. Kristian got to show us one of his favorite spots on Treasure Island: Mersea, where the tacos are great and the view is even greater: 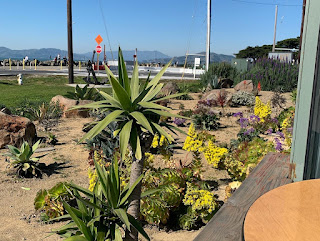 One of the highlights of the trip was a visit with a friend in Sausalito, where we went kayaking from her houseboat on a beautiful sunny day: 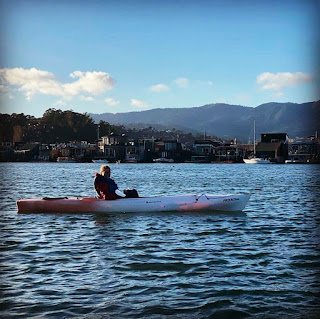 As soon as we were back on the East Coast it was time for some serious house hunting. We had been saving up for while and we were sick and tired of renting, but we were also not sure if we could even manage to get on the market with a house we could afford. Until we found this (half) house waiting for us right in the center of Doylestown. It took one week from a mortgage pre-approval to a signed contract, and we are quite certain that God had this house waiting for us. 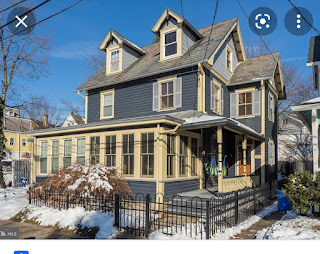 It was also the spring of 2022 that Luca's many many hours of practicing on the flute started to pay off. He auditioned for BCMEA (Bucks County Music Educator's Assembly) and we got to sit in on the efforts with a big concert in March. We are beyond grateful to live in a corner of the US where music is so highly prioritized and accessible. 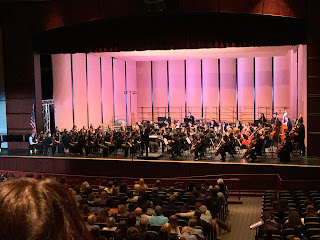 We barely had the ink dry on the final sale documents for our new home before we had to hop in the car and go to Michigan to watch Ulrik graduate from Umich. To see the field of the Big House filled with graduates and know that Ulrik was down there somewhere, was a big moment for us. 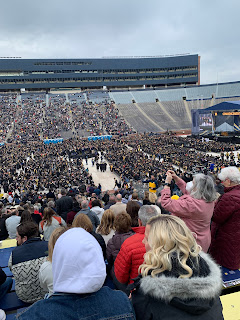 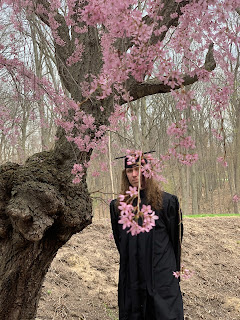 As soon as we were back the chaos of getting the house ready for move-in began with many weekends and evenings spent painting, wallpapering, carpet cleaning, porch repairing etc. Here's a snapshot of the mess as we were right in the middle of everything: 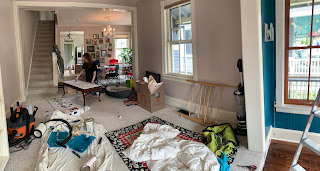 We moved into our new home in mid-May and almost immediately began to feel the benefits of living right in the middle of Doylestown such as just walking up the street to watch Luca's first performance with the Marching Band in the Memorial Day Parade: 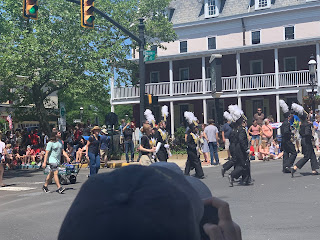 or to be able to just go to the end of our little street and cross the road to watch movies in the park: 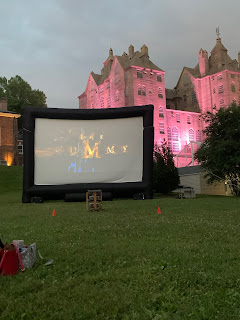 Every day still I wake up feeling grateful that we are right here in the middle of everything.

The biggest highlight in the month of June was by far the Coldplay concert in Philadelphia. I was supposed to go with Teresa, but as she was still in Oregon I brought Kristian instead and now have him turned into a huge Coldplay fan as well! 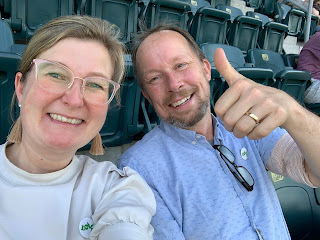 At this point it has almost become a tradition that we spend 4th of July with our best friends in Michigan. Escaping the muggy heat on the east coast and spending some days close to a lake is the best. Luca also get to spend time with his 2-person fanclub, who will try their very best to make sure he stays just a little bit longer........ 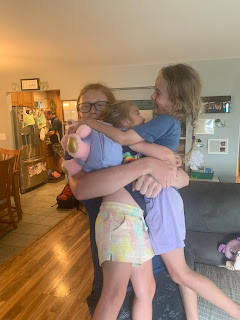 Later on in July we were the ones hugging Luca hard before he went across the Atlantic to spend some weeks with my sister. His first flight by himself was a nerve-wracking wait as Scandinavian Airlines were on full blown strike at that time, and we were not sure if there would even be a flight for him. But here he is on his way through security towards the gate: 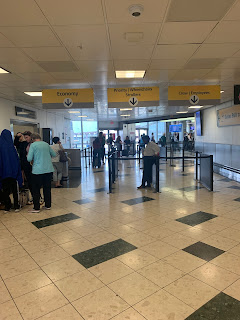 One of the things I had looked forward to since getting our house was showing it to my sister. She brought Luca back in August, and besides walking around Doylestown, where we - among other things - paid Ulrik a visit at the Tileworks, where he works as a ceramicist and tourguide: 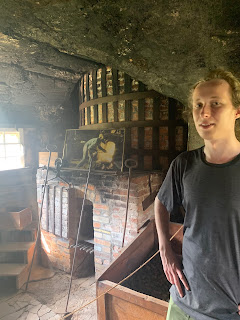 we also made sure to visit the big apple (I still have to get used to NYC only being a few hours away). It was hot and it was crowded but also a lot of fun. 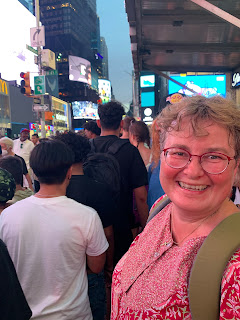 We started September with yet another NYC trip. This time to the flute center of New York as Luca is now playing at a level, where his old flute can no longer keep up. 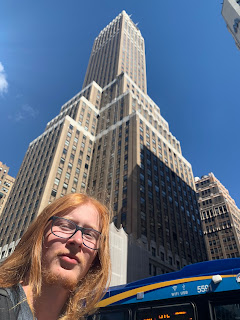 September was also the month where we learned that we may live in the center of Doylestown, but wildlife is still present. We had a hunch that a local fish thief was paying a lot of interest in our little goldfish pond. And one morning we almost caught said thief (or rather Daisy almost did) as there were still very wet racoon footprints by the pond when we got out! 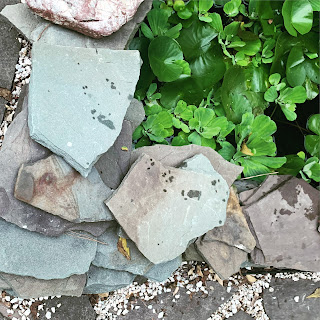 And last but not least we finally had Teresa become an American Citizen. The immigration services put her application on hold for close to a year longer than the rest of us, and as all she wants is to go back to Copenhagen to go to University it was quite frankly becoming a bit nerve-wrecking not to hear back for so long. When her oath ceremony was over we decided to go celebrate in the exact same spot where the rest of us all celebrated last year (and where we all got Covid......). This time around we did not get any virus though 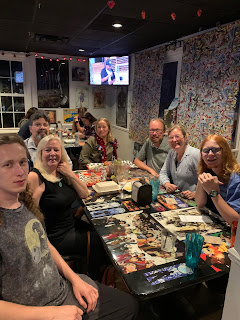 With the purchase of a home with a porch, Halloween instantly became more fun this year. I made sure to get e couple of skeletons and this year the theme was shark: 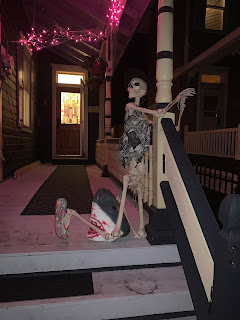 2022 also became the year where I finally got invited to an epic Halloween party with some of my colleagues (I have been lobbying for this for years). It was nothing short of the best Halloween party ever with hosts that go all out. Here we are, Kristian and I. Kristian went full on vampire whereas I (unsuccessfully..) tried to win the prize for best costume by dressing up as that colleague who always end up winning. No such luck, but still a lot of fun: 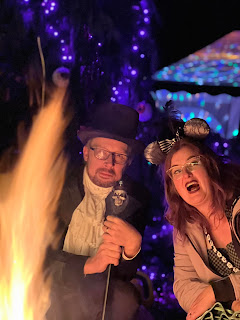 We embraced being American full-on by deepf-rying a turkey for Thanksgiving. A 15lb bird only took about 45 minutes of cooking time but turned out delicious. Only downside is that it has to be watched at all times, but Kristian and Teresa did not seem like they minded at all 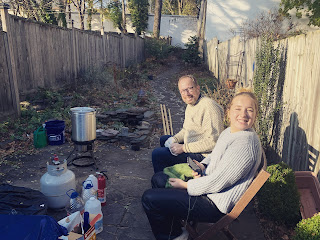 And here we are at the end of 2022. I writing this post from my favorite room in the house - our sun room. 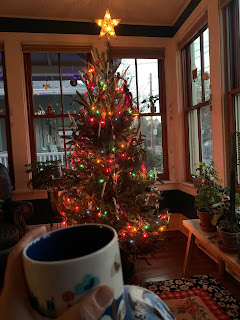 Last year around the same time I remember thinking to myself that I just couldn't bear setting up the Christmas tree in our rented house one more year - and we didn't have to!

We have also spent December exploring a few of the local Christmas markets and Betlehem exceeded our expectations with an old abandoned steel processing plant towering over a big cozy market place: 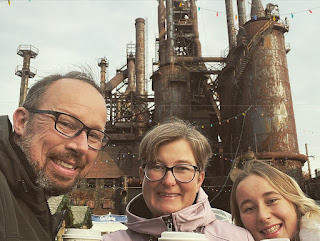 Merry Christmas from all of us here on the East Coast